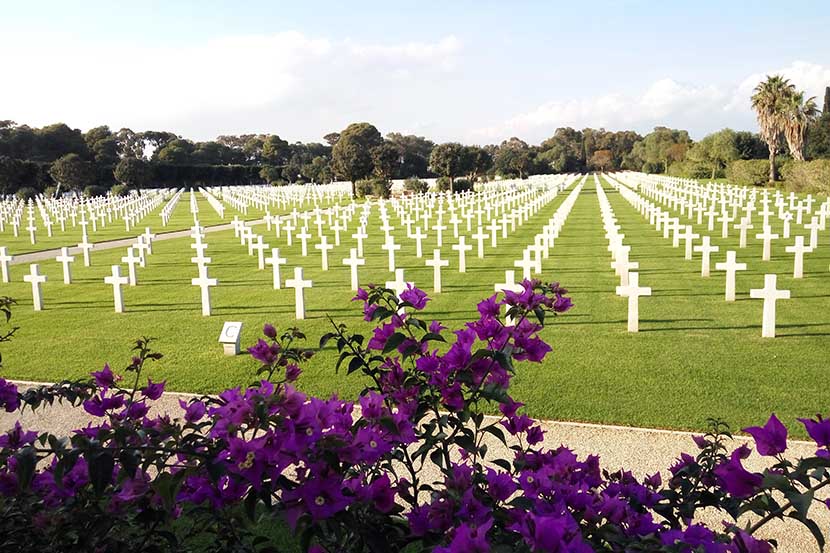 World War II Sites in Tunisia: The Tunisia Campaign / The Battle of Tunisia

The Tunisia Campaign also known as the Battle of Tunisia is a series of battles that took place in Tunisia during the Second World War between the 17th of November 1942 and the 13th of May 1943. They opposed the forces of Nazi Germany (80.000 men) and Italy (110.000 men) and the Allied forces consisted of 130.000 British soldiers, 95.000 U.S. troops, and about 75.000 French colonial soldiers. The campaign began with success for the Germans but with the superiority in numbers and weapons the Allies eventually led to the complete defeat of the Germans.

The North Africa American Cemetery and Memorial (located in Carthage)

The North Africa American Cemetery and Memorial is a 27 acre military cemetery and memorial site located in Carthage and commemorates the United States military casualties during World War II. It is the home to 2,841 graves and a Wall of the Missing inscribed with the names of 3,724 soldiers who went missing. The cemetery is open to the public from 9 a.m. to 5 p.m. on weekdays except on Tunisian Public holidays, Christmas (December 25) and New Year (January 1). A staff member working in the Visitor Building is available during opening hours to answer any questions. There is also a chapel on-site.

The Enfidaville War Cemetery houses the graves of 1,551 soldiers who died in the course of the North Africa Campaign. There are 88 that haven’t been identified. The area in which the Endifaville War Cemetery is located and the surrounding area of Tarkouna witnessed fierce fighting near the end of the North Africa campaign during World War II. Most of the soldiers buried at this cemetery perished during the period of March to May 1943. The town of Enfidaville was itself captured by the Allied Army.

The cemetery is open at all times including weekends for visitation.

The Battle of the Kasserine Pass was the worst defeat the US had yet experienced in the course of the war. In February 1943, the German-Italian Afrika Korps attacked the US forces that were defending a two-mile wide valley within the Dorsal Mountains in Tunisia. This gap was seen by the German army as a weak point who aimed to push the Allies out of Tunisia. The battle continued from the 19th till the 25th December and resulted in a retreat of the US forces.

The Mareth line was a 45 km long fortification system built by the French between 1936 and 1940. Its purpose was to protect Tunisia (French protectorate) from potential attacks from the Italians coming from Libya. This fortification consists of 8 artillery bunkers and 40 infantry bunkers to resist the enemy attacks.

In June 1940, the Mareth line was demilitarized and disarmed as the result of an armistice signed between France and Germany. On November 9, 1942, French North Africa was invaded by English-American troops by a surprise Operation Torch. As a result of this surprise attach, the German-Italian troops reacted with the Tunisia invasion. During the same month, the German army led by Rommel rearmed the Mareth line as a defense against the Allied fighters.

The Battle of Mareth took place from March 16 to March 28 in 1943. The English troops numbering 160,000 soldiers fought against the 76,000 Axis troopers over a period of 10 days, but were not successful in passing the defensive Mareth line.

At the Military Museum of Mareth Line, you will be given a guided tour by a Tunisian army officer to learn about detailed battle plans, war uniforms and weapons, and watch a featured short film of the Battle of Mareth. Outside the museum, you will be able to see the war bunkers, defensive trenches and artillery guns used during the war.

You don’t have to be a World War II aficionado or history buff to enjoy these World War II Sites in Tunisia. We hope you enjoy learning about the rich history of Tunisia.

Joshua Mok is a cultural enthusiast and adventurer who can speak 6 different languages. Joshua currently lives in Tunisia and has firsthand experience with the language, people, and culture of North Africa. At Mosaic North Africa, Joshua is combining his business marketing expertise with his passion for travel to help others discover and enjoy the cultural and historical beauties of Tunisia, Morocco and Algeria.
PrevNext
4 Responses