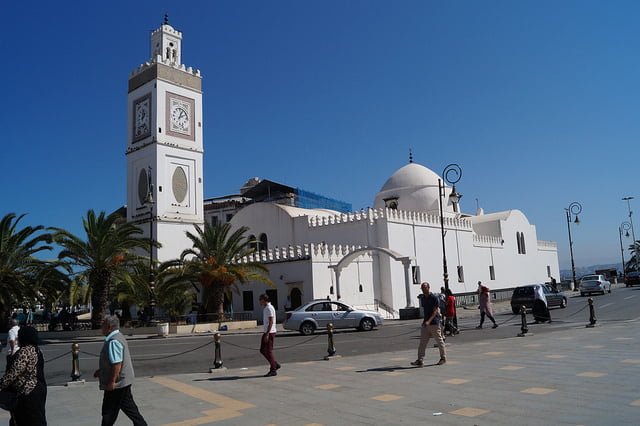 The Mosque Djamaa el Djedid in Algiers is one of the historical mosques of Algiers. It is located in the neighborhood of the lower Casbah. It was built in 1660 by the Dey Mustapha Pasha in the typical Ottoman style.  There have been several reconstructions that served different purposes. The mosque managed to preserve its style during the French onslaught. Due to its proximity to the sea, it also earned the mosque the nickname-Mosque of the Fisherman. It is built of stone, marble, brick, and plaster. The interior is made of ceramic and wood. The mosque Djamaa el Djedid bears the landmark of several architectural styles including Byzantine, Turkish and Andalusian. The mosque has been designed by Hajj al-Habib who was known to adhere to the Ottoman model. His initial plan resembled to a basilica formation which led to the construction of the three perpendiculars to the qibla wall naves. Massive masonry ensures stability following the example of the Byzantine builders. The mosque’s mihrab has an octagonal niche wearing a cul-de-four. The dome is confined to the four corners by ovoid cupolas of the aisles which are based on an octagonal drum and four pendants.

The Mosque Djamaa el Kebir or the Great Mosque in Tlemcen occupies the site of what was probably an ancient pantheon. It was the first mosque to be built in the region in 1082. It is one of the best-preserved examples of Almoravid architecture. It was built under sultan Yusuf ibn Tashfin but substantially reconstructed and enlarged by his son Ali ibn Yusuf. An inscription dates this reconstruction to 1136. Sultan Yaghmoracen, the founder of the Abdalwadidi dynasty of  Tlemcen has added a section a minaret, and a dome in the 13th century. The minaret is 34 meters high adorned with marble columns. The mihrab is finely ornamented with arabesques. Next to the mosque there was once located the Islamic court (Makhama) and an Islamic university. The mosque is one of the most beautiful and well-kept buildings containing a history of a thousand years.