When you book with an account, you will be able to track your payment status, track the confirmation and you can also rate the tour after you finished the tour.
Sign Up
5993 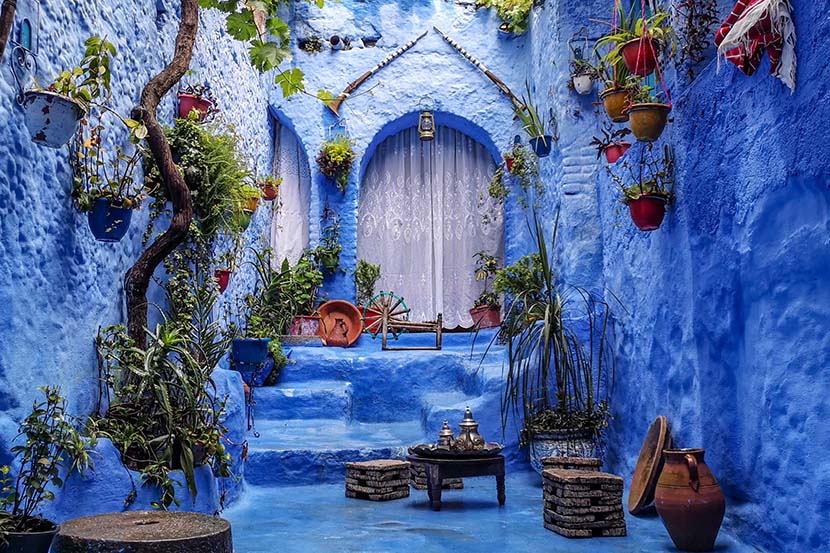 Welcome to Morocco! Today you will arrive at the Casablanca International Airport and be driven to your hotel in Casablanca.

If you have an early arrival, you may want to take an afternoon guided tour of Hassan II Mosque, the third largest mosque in the world. Its minaret has a height of 210 meters (690 ft) making it the tallest religious structure in the world. Considered as the most ambitious structure ever constructed in Morocco, the Hassan II Mosque rises above the Atlantic Ocean and dominates much of the city’s skyline.

You will take lunch in Rabat and continue driving north into the mountains to Chefchaouen, the famous “blue pearl” of the Rif mountains in Morocco. Dinner will be at the hotel/riad.

Today will be a full day to relax and to enjoy the breathtaking beauty of Chefchaouen. You will have a guided tour of the city as you learn about the unique history and cultures found in this region.

You may want to take a hike up to the Spanish Mosque on a hilltop. This mosque was built by the Spanish in the 1920’s, but was never used. From the hilltop, you will have a spectacular panoramic view of this beautiful town.

Enjoy taking a stroll through the blue alleyways and blue-washed buildings and around the quaint medina. Some particularly interesting landmarks include a natural waterfall, a public communal laundry, community ovens and a Kasbah. Dinner will be at a local restaurant.

You will travel to the ancient Imperial City of Meknes. You will have time to explore the city but you will want to pay particular attention to locations focusing on the era of Moulay Idriss: his underground prison, gates, and his mausoleum. A horse and carriage ride may finish the afternoon nicely. From Meknes, you will drive to Fes where you will take dinner in your hotel/riad.

After breakfast, you will take a full day guided tour of the famous ancient medina of Fes. In this 1,200 year old city, you will visit sites where very little has changed since the city was first established. You will explore the labyrinth of narrow streets and main thoroughfares lined with fresh fruit, mounds of spices, intricately woven Berber carpets and many other Moroccan artisanal items. You will be swept back in time as you wander through the labyrinth of streets and alleys, visiting the tanneries, bronze workers, mosques, the University of Al-Qarawiyyin, carpet makers, the Nejjarine Square and Museum, Mellah (Jewish Quarter), potters, mosaic artisans, and more.

You may want to take lunch at a restaurant in a traditional house in the heart of the medina close to the world famous Kairaouine mosque. After lunch you will continue on with your guided tour. Dinner will be at a local restaurant.

After breakfast wind your way through pictureque scenery to Ifrane, also known as ‘Little Switzerland‘. You may want to photograph this beautiful modern town and perhaps enjoy one of their cafés.

You will then travel and try your luck at spotting Barbary Apes in the cedar forest and continue traveling through the breathtaking Middle Atlas mountain ranges. Later in the day you will reach the unique Kasbah hotel in the oasis town of Erfoud. Dinner will be at the Kasbah.

After breakfast, you will be picked up by a 4X4 vehicle to take you begin your Sahara Desert adventure. You will reach your tented camp in the Sahara and then in the late afternoon take a camel trek and watch the sunset over the majestic Sahara dunes.

You will enjoy an unforgettable evening unde the millions of stars as you enjoy the delicious local dishes served for dinner.

This will be an early morning to see the sunrise over the dunes. After breakfast, you will ride your camels back to the Kasbah and be driven by 4X4 back to Erfoud where you will you meet your driver.

As you get back on the road with your driver your first stop will be Tinghir to visit the awe-inspiring Todra Gorges. There will be fantastic photo opportunities of this giant gorge. After this, you will finish the day either in Dades Gorge or Ouarzazate.

After an early breakfast, the group will depart for Marrakech. The first stop along the way will be at the Kasbah Ait Ben Haddou where films such as ‘Lawrence of Arabia‘ and ‘Gladiator‘ were filmed. The beautiful drive to Marrakesh will take you up and through the the High Atlas Mountains.

Once in Marrakech, you will check into your hotel and then head off to the Djemaa el-Fna, the center square of the medina. This famous square is one of the center attractions of Marrakech with its local storytellers, entertainers, and delectable barbeque. It is well worth a visit! Taking a quiet cup of mint-tea at one of the cafes overlooking the square provides a spectacular birds-eye view of the exciting environment. Dinner will be in the hotel/riad.

After breakfast, you will have a guided tour of Marrakech. En-route, you will discover the Palace of the Bahia, the Saadian Tombs, and many other fascinating landmarks.

After lunch, you will continue with the tour on to the magnificent Koutoubia Mosque and the famous Djemaa el-Fna, one of the center attractions of Marrakech. The tour will conclude with a stop by the souk (market) lined with fresh fruit, mounds of spices, intricately woven Berber carpets and many other treasures of Morocco. Dinner will be in a local restaurant.

After breakfast, you may want to take a short walk around Marrakech before making your way to the coast to visit the artsy town of Essaouira.

Upon arrival, you will check into your hotel and you will have free time to explore the medina and beautiful views of the coast. Dinner will be taken at your hotel/riad.

Today you will travel to Casablanca via the beautiful coastal road through El Jadida. Make sure to stop in El Jadida to explore the Portuguese fort. Once you reach Casablanca, you may want to visit the medina or do any last shopping. Dinner will be in a local restaurant.

After breakfast, your driver will take you back to the Mohammad V Casablanca International Airport, thus ending your Highlights of Morocco tour. 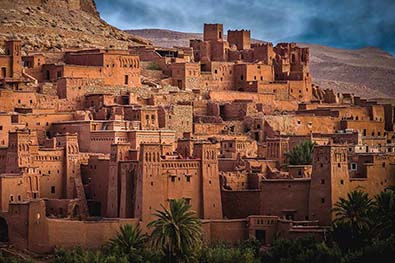