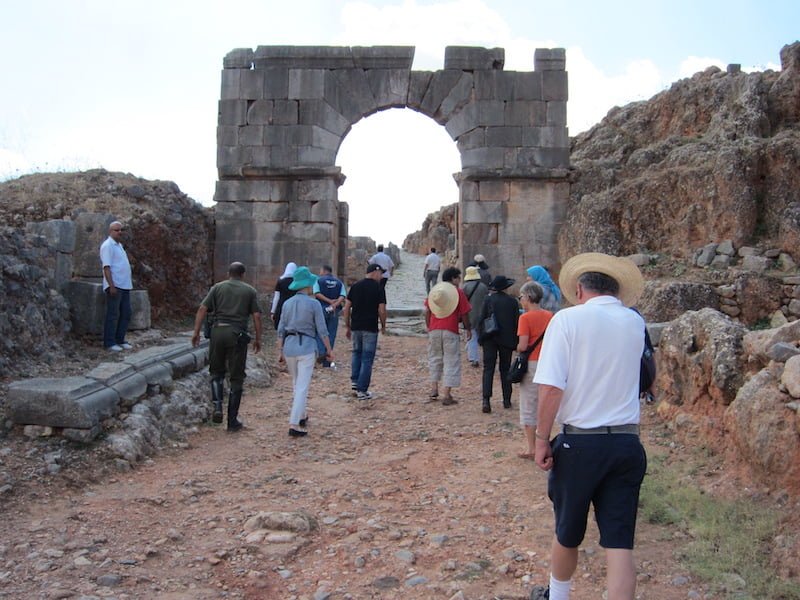 The ruins of the city of Tiddis are few kilometers away from Constantine and they served as protection during the era of the Romans. Tiddis itself occupies a picturesque fortified position at the entrance of the Gorges du Khreneg. The resemblance to the site of Constantine had incited the population to name it El Ksentina Kdima or the old Constantine.

A recently constructed road of 28 kilometers links Tiddis and Constantine. After one last turn on this winding road and you will be suddenly facing the wilderness of the mountains, dominated by rocky formations. The modern neighborhoods are adding a touch of ochre in the middle of green landscapes. The old Roman road winding up into the mountains gives access to various terraced assembled buildings some of which are carved into the rocks. The ruins are spread over forty hectares. They can be divided into three groups – the ones occupying the plateau, those on the eastern side and the ones at the foot of the cliff.

The main buildings discovered during the excavation expeditions occupy the eastern slope. An imposing door bearing a bow ornament gives access to the city. A paved road leads to the first small place that served as the market. The upper terrace has a small forum where there are three open rooms that have no connection between each other, but are all three facing east.

The small town seems to have been the home of many religious communities that all left behind the sanctuary of Mithra, the temple of Vesta, and the sanctuary Cereres. At some of the higher places of the city, African deities have also been found. Archaeologists have discovered a large collection of pottery which existed during the Middle Ages.

While visiting Tiddis, you will for sure notice a considerable number of water tanks which speaks of the absence of constant sources. The large tanks were filled with water from the mountain springs. The inscription in one of the cliffs dated from the middle of the 3rd century celebrates the proceedings of collecting water. The ancient Roman ruins are one of the most remarkable heritages of the region.

If you are interested in visiting Tiddis in Algeria, our travel experts are happy to assist you to plan an unforgettable Algeria tour.