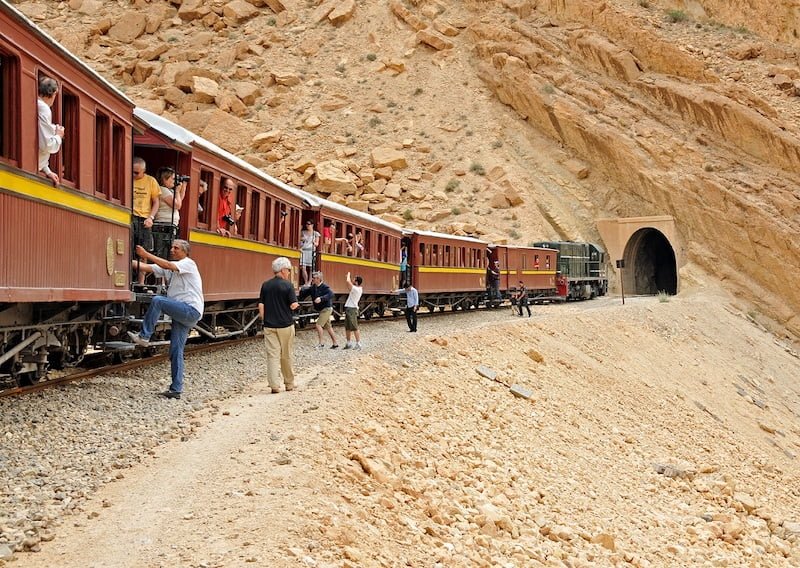 A ride on the Red Lizard Train is a must during your private Tunisia tour. This amazing and extraordinary journey takes you through mountain valleys with incredible scenery. The train was used in the movie Indiana Jones’ The Last Crusade’. The railway was built in the 19th century. In the early 20th century, the train was used for transporting phosphate deposits from mining sites. This route begins in Metlaoui.

The Red Lizard train or the Lizard Rouge as it is called in French is beautifully restored offering a memorable adventure. The narrow-gauge railway snakes through walls of red rocks revealing the breathtaking scenery of the Seldja Gorge. The Gorge is another Tunisian treasure hidden in this part of the country. It is 9 miles long and the only way to be seen is by taking the Red Lizard Train ride. This journey will also reveal a special part of the Saharan Altas Mountains that is not accessible by foot or any other means of transportation.

The carts bear the typical rustic, wooden panels and old-fashioned décor of a French antique train. A powerful diesel engine ensures a steady climb… There are a few stops for spectacular photoshoots.

The Red Lizard Train departs three times a week. Make sure you come an hour early so you can take a nice seat next to the window. Once the ride commences you will be taken across a rugged landscape, over bridges, through tunnels in the mountains.