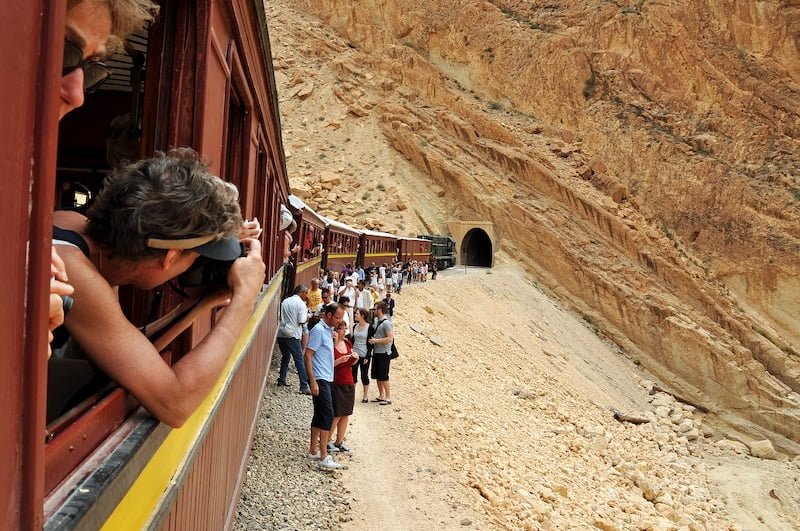 Capture all that Tunisia has to offer by taking to the railway and creating memories that last a lifetime. Setting off from the town of Metlaoui, located between Gafsa and Tozeur, the famous old Red Lizard train in Tunisia will take you on an adventure through the spectacular gorges which decorate the landscape. There are plenty of opportunities to take photographs so that the whole experience can be re-lived again and again.

One of the most remarkable facts about the expedition is hidden in the history of the train itself. This French train, made up of six carriages, was neglected for years following Tunisia’s independence. However it made it’s reappearance in the mid-70s as ‘The Lezard Rouge’ and began it’s latest role in the gorges of Southern Tunisia in 1984.

The journey lasts for approximately 1 hour and 45 minutes. The Red Lizard train in Tunisia used to run three trips a week on Mondays, Friday and Saturdays. The train no longer has a consistent schedule, but it is typically running regularly at the end of the year around Christmas time.

Update on the Red Lizard Train in Tunisia

We do not include a Red Lizard Train ride in Metlaoui anymore in our Tunisia tour itineraries. Unfortunately, their train schedule has been inconsistent for many years, and only running when they reach a certain quota of passengers. They have stopped running their train for some time and therefore we were forced to remove this train ride from our Tunisia tours. We do hope the Red Lizard Train service will be once again open to travellers in the future.