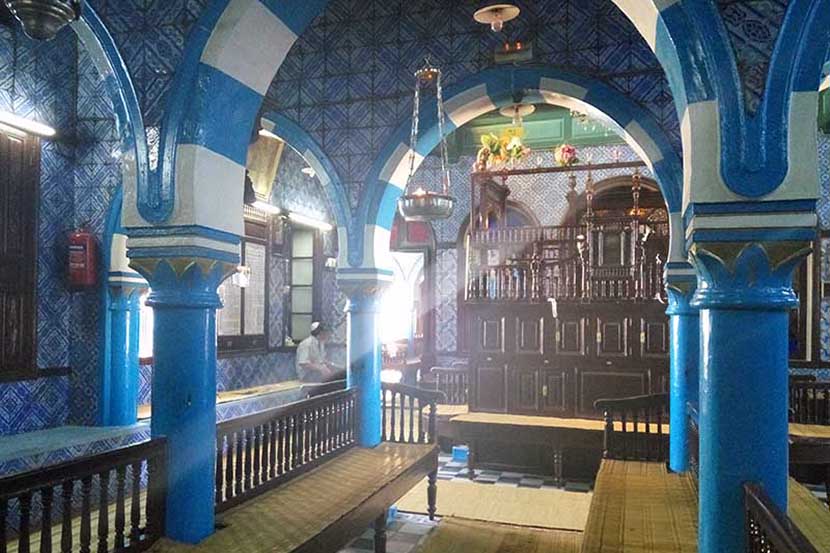 The El Ghriba Synagogue is located on the island of Djerba in the village of Harah Sghira and is the most famous Jewish site for the local community.

The synagogue is a low built construction in a typical Djerbian style of the Malikite tradition. It is a relatively small building with beautiful interiors with intricate details. The exterior is white with touches of blue. Due to the 2002 bombing, you will see a large security presence. As part of the tradition, you need to leave your shoes at the entrance and walk barefoot before entering the synagogue.

The El Ghriba Synagogue is where the annual pilgrimage for local Tunisian Jews celebrate the holiday of Lag BaOmer. The fame of the synagogue takes its sources from the many traditions and beliefs that influence its importance among the community.

According to one of the traditions, the beginning of the synagogue is marked with the establishment of the first Jewish settlers in the Island of Djerba. These were priests from the First Temple of Jerusalem built by the Babylonians in 586 BCE. The tradition tells that the priest brought with them a door and a stone from the altar of the destructed Temple.

According to tradition, the synagogue was built in the first half of the 19th century on a place that was previously occupied by a beautiful and strange young girl that was never invited into the community. It was only after her death in a fire that the Jewish people realized that she was actually a saint and chose her last dwelling as the place for building the synagogue.

Visiting El Ghriba is a must-see when in Djerba. If you are interested in visiting Djerba Island, our travel experts are happy to assist you to plan an unforgettable Tunisia tour.

Joshua Mok is a cultural enthusiast and adventurer who can speak 6 different languages. Joshua currently lives in Tunisia and has firsthand experience with the language, people, and culture of North Africa. At Mosaic North Africa, Joshua is combining his business marketing expertise with his passion for travel to help others discover and enjoy the cultural and historical beauties of Tunisia, Morocco and Algeria.
PrevNext
1 Response