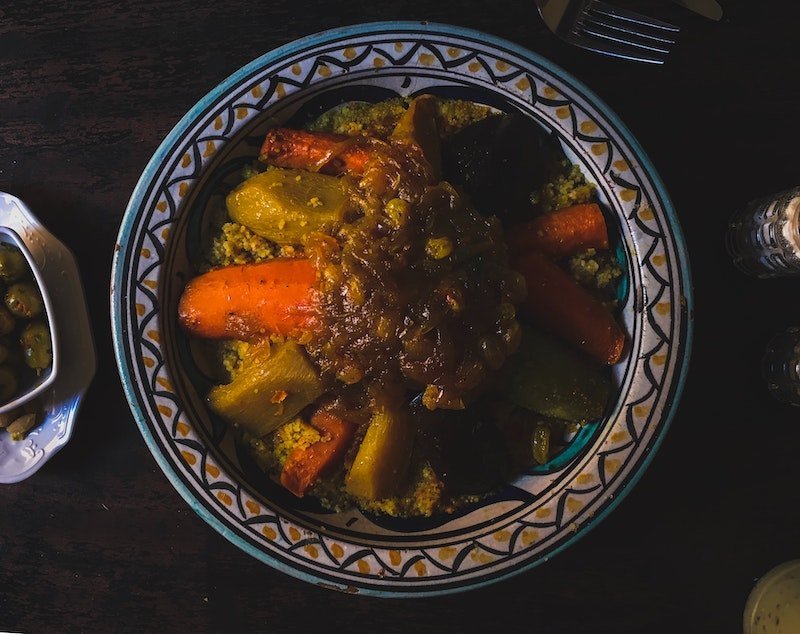 Following our popular article on everything you need to know about Tunisian Harissa, we will now explore Moroccan cuisine to discover the world famous Moroccan tagine.

Disclaimer: Reading this article may make you extremely hungry. You have been warned!

What is a Moroccan Tagine?

The Moroccan tagine (the French word is “tajine”) is a traditional Moroccan dish resembling a tender, stew-like dish which is slow-cooked in the traditional cookware. It takes its naming after the well-known earthenware pot made of clay or ceramic in which it is being cooked over coals. The simple thought of this splendid dish evokes all the sweet memories of the scents of Northern Africa. Once you have tasted a Moroccan tagine, it will leave you craving for more.

The main ingredient in a Moroccan tagine is any type of beef, lamb, poultry or fish that is fresh and in abundance in the market. It can also be a delicious vegetarian dish without any meat.

The Moroccan tagine is a simple dish whose success depends mainly on the method of cooking. The slow cooking allows the meat or fish; vegetables and spices mix their scents in a perfect combination. The slow cooking leaves the meat juicy and tender. Adding oriental spices makes it even more tasteful and rich in aroma. A well condensed sauce will ensure the enhancing of the flavors. This easy to make dish is a safe haven for any cook lacking talent or imagination as you simply use a base ingredient and build on it with herbs or vegetables of any sort.

This traditional Moroccan dish is prepared with coriander, cinnamon, nutmeg and cumin which gives the dish a savory and sweet taste. Adding garlic, parsley, lemon and olive oils can emphasize the flavour of the dish.

While there are a great variety of Moroccan tagines, the best tagine is usually one that mixes sweetness with a sour taste. This creates an unique flavour that is considered delicious among Moroccan cuisine. As such combination is not typical in the Western world, a tagine prepared with dates, apricots, raisins or prunes in combination with roasted almonds or honey is an amazingly delicious dish.

The Moroccan tagine is traditionally served with cold drinks like mineral water, fruit juices or soda. This great meal cannot be concluded without a cup of coffee served in a glass or a sweet tea flavored with fresh mint.

Now that you know so much about the Moroccan tagine, it’s time to learn how to prepare a Moroccan tagine in your own home kitchen. The following are two simple recipes for cooking an authentic Moroccan Kefta Tagine and a Moroccan Prune Tagine.

The Moroccan tagine with meatballs is a traditional meal with flavours and tastes of the Maghreb. This is one of the quickest tagines to prepare. It is cooked with ground beef (kefta) in sauce and is garnished with eggs. The following is a simple recipe to cook your own Moroccan kefta tagine at home.

For cooking a Moroccan Kefta Tagine, you will need the following ingredients:

A Moroccan tagine with prunes is arguably one of the most delicious Moroccan meals. It takes about 60 minutes to prepare and below are the ingredients for 2 servings.

In a large pot put two chopped onions and fry in olive oil for 5 minutes. Then add the meat seasoned with salt and pepper. Mix well, add enough water to cover the meat and cook on low heat. Take another bowl for cooking the prunes separately. Take a bowl with water and add the prunes, sugar, cinnamon, and the boil. Next, take the meat with the remaining sauce and mix all together in the pan. Add the third onion and sprinkle with two tablespoons of sugar. Then allow a few minutes and then turn off the cooker. In a dry pan, fry the almonds and the sesame seeds. Arrange the meat and prunes on a serving dish. Drizzle with sauce and garnish with browned almonds and sesame seeds.

The secret to cooking this tagine is patience and slowly adding the ingredients together. Enjoy this delicious Moroccan prune tagine!