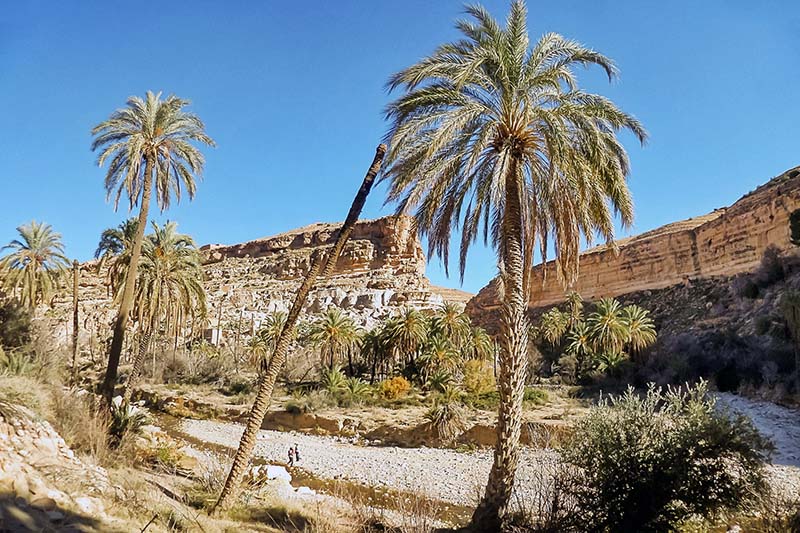 The Ghoufi Canyon also pronounced “Rhoufi” is a breath taking site located in the Aures in Algeria. The village Rhoufi belongs to the municipality of T’kout in the Wilaya of Batna.

The Canyons of Ghoufi, also known as the Balconies of Ghoufi, are some of the most beautiful in the world. It is one of the wonders of nature in Algeria. You will pass through the winding canyon Wadi Labiod (Ighzer Amellal) after a long journey in the mountains of Chelia. These rocky formations are like a true century old citadel that is stretching from Tifelfetl to Kef Laarous which is 90 kilometers south from Batna in the direction of Biskra.

The Balconies of Ghoufi are an unforgettable site overlooking the oasis. Cut in the cascades in the rocks, these natural balconies have attracted people in ancient times for its mild climate and protection. The first dwellers of these fascinating formations built their homes into the rocks that remained a silent witnesses to the unique history of the region during war and peace time.

According to ancient writings, these extraordinary homes are almost 4 centuries old and were inhabited until the 1970s. They resemble more to summer retreat houses because of its surroundings with river banks and palms. Figs, prickly pears, and pomegranates have are picked here as well as some grain harvest.

Offering breathtaking views, the Canyon of Ghoufi, should be added to your Algeria itinerary. In 1928, the Canyon was named a national heritage of Algeria.

Planning a Trip to Ghoufi Canyon in Algeria

Contact Mosaic North Africa and we will be happy to plan a private tour to Algeria including a visit to this gorgeous Ghoufi Canyon. You can also browse through some of our popular Algeria tours which can be fully customized including adding an extra site visit to the Ghoufi Canyon.