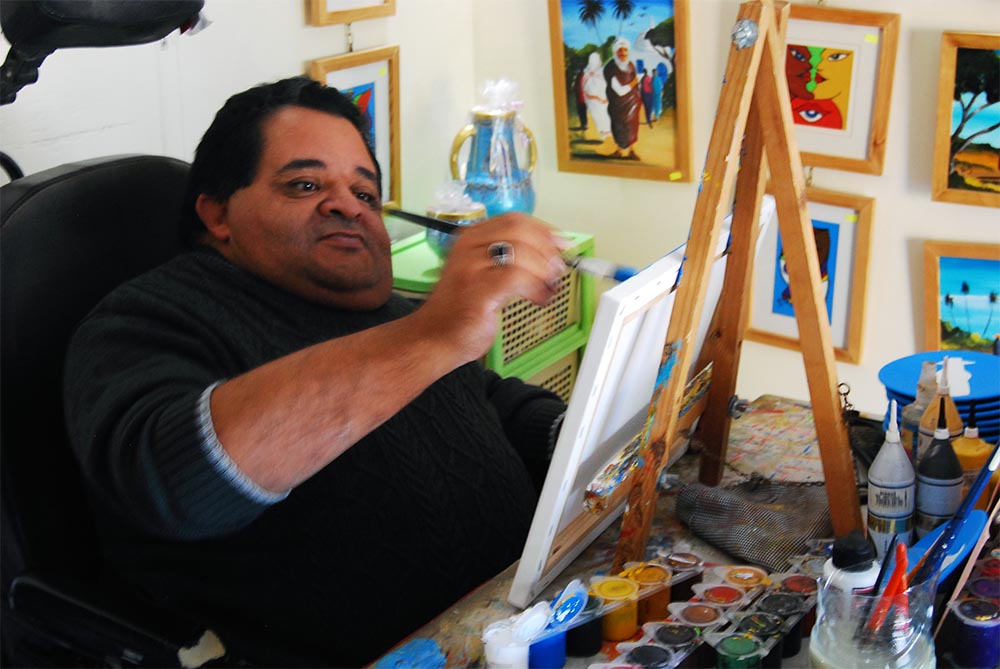 We all love a good book or movie about an underdog who is victorious despite all the odds stacked against him. But how many of us can tell underdog tales from our personal experiences?

Walid’s story is a true, uplifting, and heartwarming story about overcoming great adversity, following your passion in life and turning tragedy into triumph. Walid is living proof that determination and hope can overcome great adversities in life. Despite his disability in the use of his legs, Walid is an artist with an amazing artistic talent that no one can deny. His artworks are visual representations that inspire us to look at adversity as surmountable obstacles.

During these 27 years, he often pondered about what to pursue in life. As a child, he had a habit of drawing with a pen. This was a good way for him to preserve the pictures as a memento to look at in the future. Walid also had an earnest curiosity about life outside his home and would imagine what the structures of houses and mosques might look like. With nothing more than his own creative imagination, he would attempt to draw these structures.

When Walid first attained a wheelchair, he felt an incredible sense of exhilaration at being free at last! He was finally able to have mobility access outside his home and he enjoyed every moment of it meeting people, eating at restaurants, and making new discoveries in the city. After 27 years, Walid was finally able to rely on his own visual senses rather than his imagination to draw the structures he had always enjoyed drawing at home.

Along with these surges of new experiences and creative inspirations also came an evolution to his art form from pen drawings to painting. He purchased his own paintbrushes and paint pallets, and began painting on his own without any formal training. Since then, Walid developed his own specialty in creating artwork by painting on wood, glass, straw, pottery, and thick paper.

Beginning in 1999, Walid started working as an independent artist in art exhibitions. It was not until after the year 2011 when Walid finally achieved his dream of opening his own art gallery store, Gallerie Walid Artiste with the financial support of his father.

His artwork had been featured in many art exhibitions in Djerba in the past. In 2013, Hotel Djerba Beach invited Walid to participate as an artisan in a Tunisian cultural night festival featuring cultural music and dance on every Thursday night. You can still find Walid working in a small boutique at Hotel Djerba Beach every Thursday night selling his artworks inspired by the traditional Djerbian lifestyle.

Today, Walid is a well-known artist locally in Houmt Souk, Djerba. His artworks represent a greater and more meaningful purpose for those aspiring to overcome adversities in life.