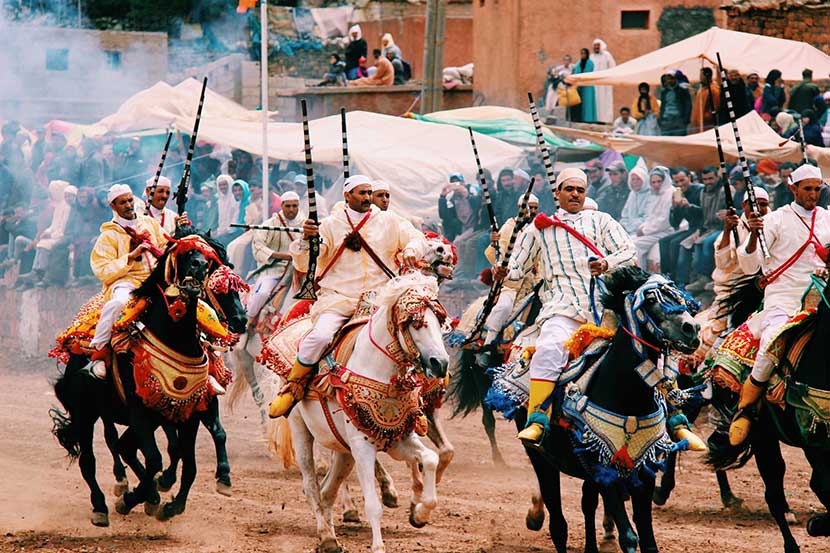 The Marrakech International Marathon is one of the toughest races on the planet. Since its inauguration in 1987, this annual marathon hosts over 9,000 competitors from more than 150 countries each year to challenge the harsh Sahara climate and conquer its sandy terrains. Competitors carry their own supplies including clothing, sleeping bags, aluminum survival blanket, anti-venom pumps and many others.

The Almond Blossom Festival is an event of great importance for the local community. It also gathers people from all over Morocco together with foreign tourists. They all have the opportunity to marvel at the natural beauty of the blossoming almond trees. The atmosphere is enriched with dancing, singing and storytelling.

The annual Marathon Des Sables which typically occurs in April is considered as the Toughest Foot Race on Earth. This legendary Sand Marathon a 11 day multi-stage race through the scourging temperatures and grueling conditions of the Sahara Desert in Southern Morocco. This marathon covers 250 km (about 155 miles) across the harsh Sahara environments. Similar to the Marrakech International Marathon, each participant must carry his/her own backpack containing food, sleeping gear and other supplies.

The annual Kelaa-des-Mgouna Rose Festival is a 3 days festival held in May which attracts about 20,000 people to celebrate the blossoms gathering. This event is held in the Dades Valley, which is also known as the “valley of roses”. It starts on a Friday evening with local crafts displayed in medina shops. On Saturday the real festival unfolds with a parading of roses followed by entertainment in the arena with songs, dances, snake charming, sword moves, and traditional music instrumental. There is also an election of a Miss Rose pageant on the final day.

Starting in May, there will be fantasia performances which will take place during local seasonal, cultural or religious festivals. These festivals are called moussem which translates to “saint’s day festival” in Arabic. The fantasia performances consist of groups of horse riders dressed in colourful traditional clothes, while exhibiting their horsemanship in a calvary charge in a straight line. These riders would fire off their old muskets at the end of the charge.

The Fez Festival of World Sacred Music is ranked among the world’s greatest music events. It gathers musicians and music lovers from all over the world. This festival features 9 days of open-air concert where the audience can be immersed in Indian classical music, Judaic sacred music, Sufi devotional music, Gypsy songs from Spain and so much more. The festival is being held at various spots of the city including the Batha Museum, Bab Boujloud and the Bab Al Makina. Be sure to sample the many authentic food and snacks sold at various vendors in-between the music performances.

The Marrakech Popular Arts Festival is an annual event spread over several days. It honours artists coming over from the Morocco, Africa, Asia, Europe and the rest of the world. The bustling city of Marrakech comes to life with traditional festivities like dancing, singing and playing traditional instruments.

The Imilchil Marriage Festival, also known as September Romance celebrates a ‘Romeo and Juliet’ legend of two star-crossed lovers from two Atlas Mountain Berber tribes who drowned themselves after their parents disapproved their marriage. This festival celebrates the freedom of young men and women to choose their own spouses, and has became a tradition for many couples to get engaged at the festival. Be sure to participate in this festive event in the rural village of Imilchil with lots of singing, dancing and feasting.

The Festival of Fantasia is a brilliant horse event held in the city of Meknes. A team of 10 riders recreate a battle attack charge dressed in traditional attire. You will be amazed by the craftsmanship with which these men ride horses. The event is accompanied by entertaining with local music, singing and dancing.

The Erfoud Date Festival is a 3 days event which occur just after the annual date harvest. This is one of the most popular Moroccan festivals and gathers both farmers and visitors in one place. Expect much traditional dancing, dromedary racing and festivities in this annual celebration.

The Casablanca International Art Fair is one of the most colourful events hosted in the brightest city of Morocco. As a true cosmopolitan place, Casablanca gathers artist from all over the world to exhibit various forms of art. This event occupies breathtaking sites such as the Old Medina, the Hassan II Mosque, Reve de mon oeil and the Octagon square in Casablanca. Featured forms of art include sculptures, paintings, photography, ceramics and many more. This is the perfect gathering point for artists and art dealers. Art lovers will not want to miss this opportunity to meet with some of the world’s best artists while enjoying the mesmerizing atmosphere of Casablanca.

Visit One of These Festivals in Morocco

If you’re looking to see what are the big happening in Morocco, we can help! Our travel experts are happy to assist you to plan an unforgettable Morocco tour around one of the many festivals in Morocco.