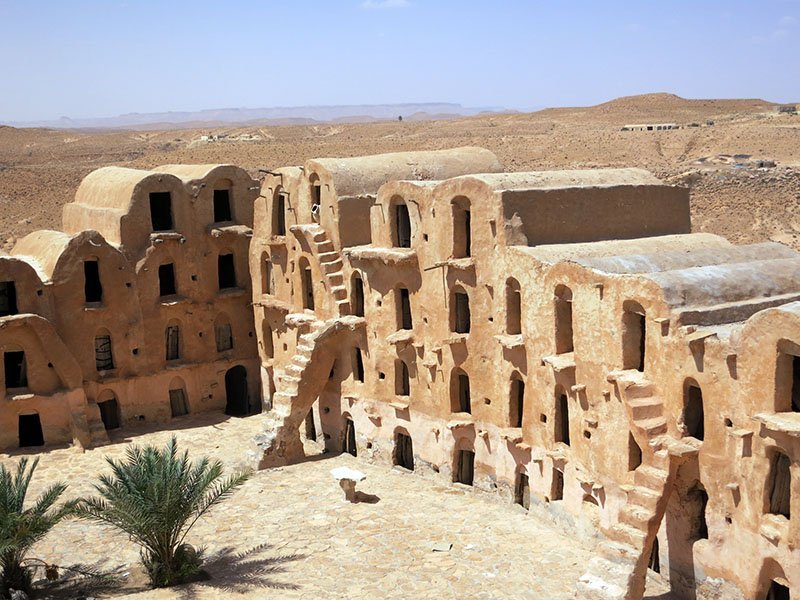 While traveling through southern Tunisia, you do not want to miss the opportunity to explore a Ksar or Ksour (plural). Ksour are ancient fortified buildings once used by the Berbers from the 15th century to store their granary and harvest. The architecture of Ksour resembles a desert castle on the outside. There are overlapping store rooms inside which are called “ghorfas”. Within the ghorfa rooms are various levels of storage which could include holes dug underground for natural refrigeration. The Ksour act as strategic buildings for storage that are well protected from looters and it is also serves as a natural meeting point for caravan traders.

There are about 92 Ksour throughout Tunisia, but the following are a few of the most popular Ksour to explore while in Southern Tunisia:

Ksar Ouled Soltane is often referred to as the best preserved Ksar in Tunisia. As you walk into the site, you’ll marvel at how the Ksar structures rise up before you. This is a beautiful spot for photos and the sunset is particularly beautiful to see how the sunlight reflects off the granary buildings. If you’re traveling with children, then the kids would love the adventure of climbing up these ancient staircases and explore the old ghorfa rooms.

Once you have seen the Ksour of Southern Tunisia, you’ll understand why it had inspired producer George Lucas to incorporate these Ksour into the Star Wars galactic universe. Ksar Ouled Soltane was used as a backdrop in Star Wars Episode I: The Phantom Menace to represent the Mos Espa Slave Quarters. You will notice the Ksour at Ksar Ouled Soltane in the scenes depicting the place where Anakin Skywalker grew up.

Another popular must-visit Ksar in Tunisia is Ksar Hadada. This Ksar is most famous for having many scenes being filmed there in Star Wars Episode I. It was used as the Mos Espa slave quarters and you will recognize Ksar Hadada in the scenes where Anakin prepared for his pod-racing competition. Many Star Wars fans visit Ksar Hadada in search of the Star Wars film locations in Tunisia.