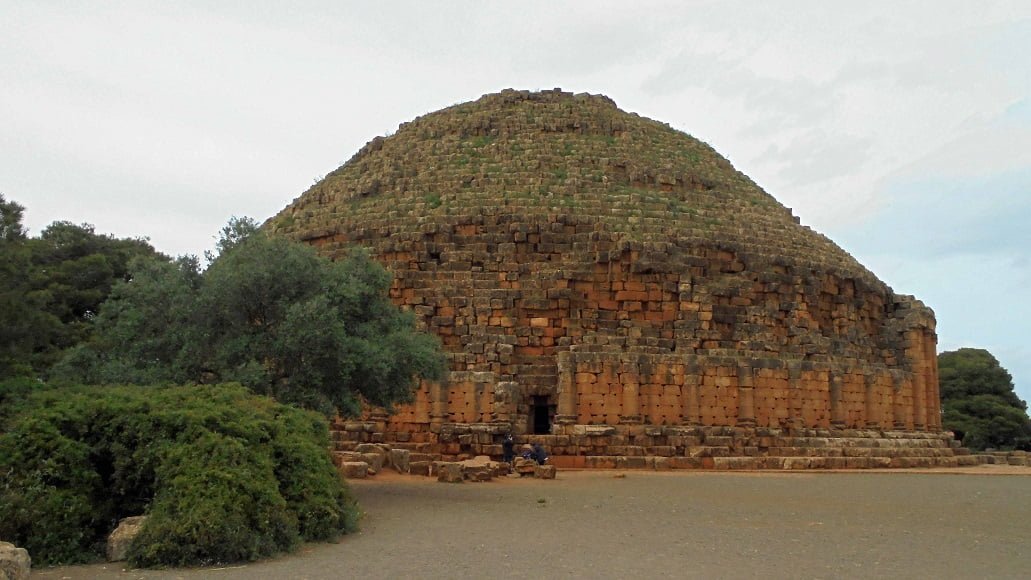 The Royal Mausoleum of Mauretania located in Tipaza, Algeria is the burial site of Queen Cleopatra and Mark Antony’s only daughter. Although her remains were never found possibly due to tomb raids, this historic site remains one of the tourist highlights to visit in Algeria.

The Tomb of the Christian or as it is known in French “La Tombeau de la Chretienne” is a magnificent mausoleum situated between the towns of Tipasa and Cherchell. The place has another name – the Royal Mausoleum of Mauretania which reveals a deep connection with the rich history of the place. This monument was included in UNESCO’s list of World Heritages in 1982.

The cone-shaped building can be seen from a distance. The mausoleum is actually a powerful stone circular building with a circumference of 185 meters, a diameter of 61 meters, and a height of 32 meters. It seems like its façade has been made out of steps lying on cylindrical pillars. East of the tomb, archeologists have discovered the basis of a small sanctuary or perhaps mortuary temple which was part of the whole complex.

A narrow and low entrance, hidden at the base of the tomb leads to the burial chamber. Straight ahead an entrance opens revealing a flat terrain with a heraldic lion and lioness, guardians of the dead. At first glance, one has the feeling that this place is filled with passageways and small chambers forming a system of stone boulders. In the center of the monument, there is a gallery with smooth walls and three-flat niches. Perhaps, these once were holding the urns of the dead. There is a lot of mystery surrounding the tomb as it is still unknown when and for whom it was built.

It is believed the monument was built in 3 BC. The only mention of this ancient “mausoleum of the royal family” is found in the description of the coasts of Northern Africa by the Roman geographer Pomponius Mela around the year 40. However, the archeological analyses allow scientists to connect the specific forms of the monument to an earlier era. Perhaps, Juba II ordered the ancient construction for himself and his wife Cleopatra Selene II (daughter of Queen Cleopatra and Mark Anthony) but this is only an assumption.

In the middle of the 1 century BC, the Arabs called it “Al-Kbur Rumiya” which means the “Tomb of the Christian”. However, the name has nothing to do with Christianity but is connected to the cross engraved in one of the false building doors. Although the symbol is found often among artifacts from that era long before the rise of Christianity, its usage is pure as a decorative ornament.

For many years the monument did not attract attention and was gradually decaying. It was in the first half of the 20th century that efforts and literary studies by the former Chief Architect for the Historical Monuments in Algeria that the Tomb has undergone extensive restoration.

Visit the Royal Mausoleum of Mauretania

You can visit the Royal Mausoleum of Mauretania on our private Algeria tour. Our travel experts are happy to assist you to plan an unforgettable Algeria tour that includes a visit to this historic site in Tipaza, Algeria.