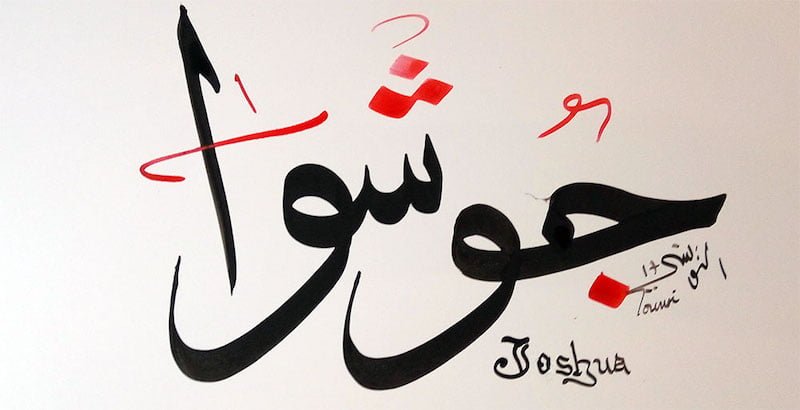 The Guellala Museum in Djerba is arguably the best museum on the island. This must-see museum attracts thousands of foreign tourists and locals to learn about the rich history and culture of the Djerbians.

There is a hidden gem to be found at the end of the Guellala museum tour. If you’re not careful, you may easily walk right past this hidden gem. Located just past the public washrooms is a small room dedicated to promoting the art of Arabic calligraphy – the artistic practice of handwriting and calligraphy to transform Arabic script into a work of exceptional beauty.

The Life of an Arabic Calligraphist – Moncef Tounsi

Moncef Tounsi is a talented artist who dedicated his professional life to creating and promoting the art of Arabic calligraphy.

It is often said that people who identify their passion at an early age have a tendency to find it while people who identify it later in life have a tendency to search. Moncef is one of those people who found his passion for Arabic calligraphy at an early age as a young Tunisian boy. This passion never left him even during his adolescent years. While studying for an economics degree at a Tunisian university, Moncef made a life-changing decision to change his major to Calligraphy Art in order to pursue his passion. He completed his Calligraphy Art studies in 5 years and spent his formative years developing his personal style of expression in calligraphic letterforms and art. Moncef mainly practices three calligraphic scripts and styles.

Starting His Own Business

After graduating from university, Moncef eventually actualized his dream by opening his own Arabic calligraphy business. Today, you can find Moncef at his small studio and art gallery at the Guellala Museum doing what he loves.

For a small fee, Moncef can write your name in beautiful Arabic calligraphy. It is common for families and couples to have their names written together. Not only will you see how your name is written in Arabic, but this makes for a great memento and souvenir to bring back to your passport country. Also at his studio, you will find a unique collection of curated Arabic calligraphy pieces.

During our interview, Moncef was proud to mention that his customers come from all around the world – Japan, Australia, America, Latin America, the Gulf region, and various Arab countries.

The Future of Arabic Calligraphy